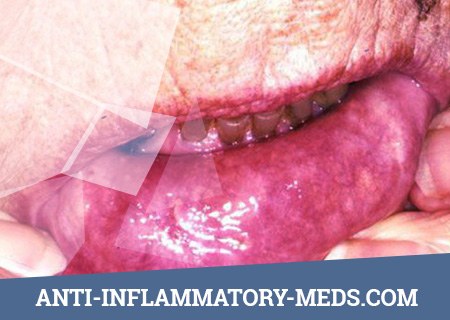 What is Wegener’s Granulomatosis?

Wegener’s granulomatosis (Wegener’s syndrome) is a systemic necrotizing granulomatous arteritis with a primary primary lesion of the respiratory tract (usually the upper) and kidney. These features suggest a certain peculiarity of pathogenesis, but its specific features in this variant of systemic vasculitis are not clear. Only a few patients found immune complexes in the blood, lungs and kidneys. The regular development of granulomas involves the participation of cellular immune mechanisms, which, however, until recently have not been deciphered.

Clinical picture
Initial manifestations may have different localization, but they usually belong to the upper respiratory tract. The patient turns to the doctor with symptoms of rhinitis, sinusitis, pronounced difficulty of nasal breathing, otitis media and blockage of the auditory tube. Earache and significant hearing loss are possible. When examining establish granulomatous ulcerated growths in the nasopharynx, nasal septum, sinus mucosa, soft and hard palate. Frequent fever, weakness, loss of appetite. A number of patients from the very beginning of the disease have signs of involvement in the process of the lungs – cough, chest pain, shortness of breath, hemoptysis. Life-threatening profuse bleeding is rare. In some cases, lung lesions occur in the later stages of the disease. Radiological signs of pulmonary pathology are very diverse: single or multiple nodes, infiltrates, cavity formation, focal atelectasis, exudative pleurisy, pneumothorax. An enlarged lymph node mediastinum is uncharacteristic.

The airways (upper or lower sections or combined changes) are affected in all patients with Wegener’s syndrome, and the sinuses are involved in the process in 90%. Granulomatous sinusitis proper is often complicated by a secondary purulent infection, which requires additional active antibiotic therapy and is often incorrectly evaluated as an exacerbation of the underlying disease.

Often, the first signs of a nasopharyngeal lesion are very modest, and only a few months later develop symptoms of a systemic disease. Individual patients in whom the generalization of the disease occurs several years after the onset of its first non-severe manifestations are described. The progression of lesions of the nasopharynx with the spread of granulomatous tissue can lead to the destruction of the nasal septum and retraction of the nasal dorsum (“saddle nose”), compression of the orbit and protrusion of the eyeball forward and down (proptosis) due to retrobulbar granulomatous inflammation, destruction of the eyeball and orbit orbit of the eyeball and orbital orbit orbit. At the same time, perforation of hard or soft palate is uncharacteristic for Wegener’s granulomatosis and gives grounds to suspect the presence of the so-called midline granuloma (see below).

Kidney damage occurs in 80-90% of patients, and the appearance of the corresponding symptoms is often the first sign of generalization of the disease. Changes in urine tests correspond to those in acute glomerulonephritis (hematuria, proteinuria), in most cases, focal glomerulonephritis is detected during biopsy. Approximately 10% of patients have a picture of rapidly progressive glomerulonephritis with the development of azotemia and the discovery of necrotic changes of the glomeruli during biopsy and the formation of a multitude of proliferative “half moon”. A number of patients develop nephrotic syndrome as a result of the glomerular lesions (in contrast to classical periarteritis nodosa, in which this syndrome is usually the result of renal vein thrombosis).

Typical histological changes in biopsied renal tissue are sometimes found in patients without any clinical and laboratory signs of renal impairment.

Arthralgia and short-term fully reversible (even without treatment) arthritis of predominantly large joints are observed in 50-60% of patients, and more often in the early stages of the disease. Occasionally, longer arthritis of the small joints, imitating RA, is observed.

Heart pathology (arrhythmias, clinical and electrocardiographic symptoms of coronary insufficiency, rarely pericarditis) are recorded in no more than 1/3 of patients.

Changes in the nervous system are found in 20% of patients. Peripheral neuropathy does not differ from those with nodular polyarteritis. Intracranial dissemination of granulomatous tissue from the nasopharynx and sinuses can lead to pathological symptoms from some of the structures of the brain base, in particular the pituitary (diabetes insipidus syndrome) and cranial nerves.

Much less often, vasculitis and granulomatosis are localized in other organs (intestine, liver) with the corresponding clinical symptoms. The correct interpretation of these changes is facilitated by the accompanying typical symptoms of the disease.

Laboratory data include anemia, neutrophilic leukocytosis, hyperglobulinemia, increased ESR (sometimes up to 60-70 mm / h and more). RF can be detected in low titers, the presence of nuclear antibodies is rather the exception. Hepatitis B infection rates are negative. For judging renal damage, it is important to monitor urine tests and the level of creatininemia.

The diagnosis of Wegener’s granulomatosis in the early stages of the disease is made primarily on the basis of the symptoms of severe nasopharyngeal lesions described above, combined with the general signs of severe febrile illness. Recognition of the disease is further facilitated with the development of proptosis, infiltrates and cavities in the lungs, renal pathology, arthritis. Of great importance is the biopsy of the affected mucous membrane of the nose or sinuses, if necessary also other pathologically modified tissues. The basis of the histological diagnosis is a combination of signs of necrotic vasculitis and granulomatous inflammation. The significance of this fact is determined by the fact that “pure” vasculitis (polyarteritis nodosa, vasculitis in SLE) granulomatous inflammation is unusual. However, in a number of diseases with a pronounced granulomatosis (tuberculosis, sarcoidosis, some mycoses), necrotic vasculitis is not detected.

Certain clinical similarities with Wegener’s syndrome can be associated with malignant tumors (with appropriate localization), especially lymphomas, which sometimes occur with symptoms of granulomatous inflammation and immune vasculitis. In such cases, biopsy is of decisive importance, by means of which malignant cells are detected. The same applies to such a rare disease as lymphomatoid granulomatosis, considered by some authors as a prestage of true lymphoma. In this disease, clusters of atypical lymphoid, plasmacytoid and reticuloendothelial cells are found in the vascular walls, including in the stage of mitosis. Granulomas are less distinct than in Wegener’s syndrome, and vasculitis as such is absent. The main localization of the lesions is the lungs, less frequently the skin and the nervous system.

The most difficult differential diagnosis with the so-called median granuloma, also called malignant, or gangrenous, granuloma. This rare disease is characterized by progressive granulomatous inflammation and destruction of the tissues of the upper respiratory tract and face. Its causes and pathogenesis are unknown. The first symptoms are usually persistent nasal congestion, purulent discharge from it, ulceration of the mucous membrane of the nose and mouth, less often also the conjunctiva. These signs are progressing with varying degrees of quickness, sinus lesions, tooth loss, secondary purulent infection with high fever and significant weight loss. Characterized by severe destructive changes in tissues – perforation of the nasal septum with saddle-shaped deformity of the nose and perforation of the soft and hard palate, not typical of Wegener’s syndrome. If untreated, there can be a massive collapse of the affected tissues, including the skin of the face and the tissues of the eye and pharynx, accompanied by a foul odor. Below the neck the pathological process never spreads. Without adequate therapy, the disease is always fatal, the course worsens after surgical interventions. Death usually occurs from a secondary infection, destruction of a large vessel or germination in the central nervous system. The main method of treatment is radiotherapy on the affected areas in a total dose of 5000 rad, which allows to achieve long-term remissions and practical cure. The main differences between the median granuloma and Wegener’s syndrome are its localized nature, the absence of visceral lesions and histological signs of vasculitis (the main feature in biopsy is granulomatosis without signs of caseous, sometimes with giant cells). In addition, Wegener’s granulomatosis is unusual in the destruction of the facial skin and palate tissues.

The prognosis of Wegener’s granulomatosis without adequate treatment is always poor. After 2 years, more than 90% of patients die; after the appearance of the first signs of kidney damage, the average life expectancy is 5 months. Corticosteroids, administered in isolation, give a very modest effect in this disease, although they can cause a marked improvement in eye damage and arthritis. The drug of choice is cyclophosphamide, administered orally at a daily dose of 2 mg / kg, i.e. in most cases 150 mg per day. Only with the rapid progression of the disease, this drug in the first days of the disease is sometimes administered intravenously. As a rule, cyclophosphamide is combined with prednisone, especially in the presence of systemic manifestations, damage to the eyes, joints, kidneys and skin. The initial dose of prednisone is 40-60 mg / day, but after the development of an obvious improvement, it can gradually decrease with the transfer of the patient, if possible, to take the drug every other day and attempt to cancel it. The main drug of the therapeutic program – cyclophosphamide – should be taken for a long time. Slow and gradual reduction of its dose (until complete withdrawal) is recommended to begin only one year after the development of complete remission. With proper treatment, remission can be achieved in more than 95% of patients. A number of patients with remission after stopping treatment last up to 15 years, which allows us to raise the question of the possibility of complete recovery. Relapses after discontinuation of therapy are rare, but can be treated again.

There are a number of works indicating a high therapeutic effect not only of cyclophosphamide, but also azathioprine, methotrexate, and chlorbutin. However, experience with these drugs is small, and so far they can only be considered as a possible alternative to cyclophosphamide in those cases when its use for some reason is impossible.